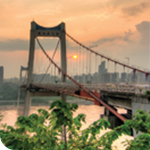 The shift in development from the major Chinese metropolises to smaller emerging cities is a trend with serious implications for global businesses.

Until recently, companies planning to develop operations in China honed in only on the areas around Shanghai, Beijing, and Guangzhou. These large Westernized cities, often referred to as Tier 1 cities, offered labor at bargain prices as well as the infrastructure to support development. Both the Chinese and the foreign companies have come to understand each other’s business practices, and that has lowered the hurdles for outside developers. However, the dramatic social and economic changes that have rippled through China in the past few years are now reshaping the landscape for industrial, commercial, and retail facilities development.

“Although industrial investment seems close to levels we were seeing before the 2009 recession in China,” says Andrew Kwok, SSOE’s General Manager of Asian Operations,” new foreign investment is experiencing a geographic shift.” Attracted by lower development costs (including land, labor and materials), operating costs, and more aggressive government incentives, some investors are opting to develop in more dispersed regions in China. Corporate giants like Ford, GM, Borg Warner, Coca-Cola, Cummins, Goodyear, and P&G are among them.

Doing business beyond the “burbs”

These new China markets, often referred to as Tier-2 and Tier-3 cities, are a recent phenomenon attributable in part to the escalating cost of living in China’s biggest cities–primarily housing costs. This has caused many migrant workers, and another migrant class, recent university graduates, to return to the smaller cities of their childhood–Chongqing, Chengdu, Tianjin, Wuhan, and Dalian for example–where living standards are rapidly improving and housing is more affordable.

Improved access to Tier-2/3 cities increasing spending power is only one lure attracting investors. Many firms are looking to lower their transportation and distribution costs. In addition, competing government officials are offering foreign investors aggressive packages of land, tax, labor, and other incentives in an effort to win the investment business.

Incentives, yes, but tradeoffs too

Investors need to proceed with caution when doing business outside of China’s most westernized cities. While the incentives being offered by outlying cities can save money, that advantage needs to be factored against the time and effort it will take to navigate a new set of rules and suppliers. There are numerous potential challenges: the availability and cost of utilities; building, planning, and code-requirements; approval processes; access to satisfactory local engineering, construction expertise, and general labor; and materials logistics issues.

That said, some of the new rules create advantages. “In some respects, it’s actually easier to get things done in the Tier-2/3 cities,” advises a US-owned automotive manufacturer. “Tier-2/3 government leaders are significantly more supportive in granting land approvals than Tier-1 city officials who tend to be more selective about the kinds of investments they are interested in.” Another auto-components executive with a long history of experience in China and Asia agrees. “The Tier-1 city officials know the business they don’t want. Tier-2/3 city officials consider everything.”

The colleagues cited in this article caution that outside investors should take a different approach when working in a Tier-2/3 city because the officials tend to do things the traditional Chinese way. That can include more socializing, dining out, and drinking alcohol than occurs when doing business in westernized Tier-1 cities. Outsiders may feel it leads to a less productive process. Without the proper understanding of the “old approach,” western business people may hear what they want to, instead of what they need to.

Talk is cheap, so validate.

Tom Ward, President of PIM, a Shanghai-based industrial market-entry consultancy, advises, “Changing your expectations is the best way to tilt the game in your favor.”

Remember you may not be the only novice to this process. Tier 2/3 officials may not have experience working with Western firms, so all parties may be on a learning curve. When dealing with government officials, contractors, and suppliers, always clarify your needs and re-clarify what you think you are being told. Test your assumptions. Nothing should go unspoken.

For some types of business, lower operating costs are not worth sacrificing access to an educated and skilled workforce. Even as the site-selection landscape expands, China’s Tier-1 cities remain the preference for foreign investment headquarters, R&D, advanced-manufacturing facilities, and the supporting professional-services industries that require China’s most skilled management and technical expertise.

The best hedge against risk

Outside companies can minimize the difficulties of executing projects in Tier-2/3 cities by engaging an experienced, independent, international project management firm. With its assistance, companies can overcome their lack of familiarity with planning requirements and sequencing of approvals inherent in working in any new environment. The firm can also help navigate fluid rules and changes to incentives (and inconsistent implementation of those changes) handed down to provincial and local officials by the central government.

“What may initially seem like subtle differences in working with designers, constructors, or suppliers in Tier-2/3 cities can lead to big problems for foreign investors who don’t know what to anticipate,” Kwok says. While international project management firms will also face limited options for hiring local suppliers, they will know what issues to anticipate and how to mitigate risk. Perhaps as important, when they encounter issues, they will address them in a manner consistent with the foreign investor’s business approach.

The automotive-manufacturer quoted earlier says he is beginning to see improvements and expects, sooner rather than later, many of the gaps in project-delivery between advanced versus emerging Chinese cities will eventually be reduced. “The differences really are shrinking,” he says.

For more information on expanding your operations in China, contact Robert Benedetti.