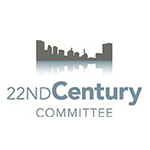 TOLEDO, Ohio, May 27, 2015 –Today, community and business leaders and the City of Toledo announced the formation of the 22nd Century Committee, which is intended to provide catalytic leadership and strategic direction on the renaissance and revitalization of Toledo’s downtown urban core.

The 22nd Century Committee is comprised of leaders from private and public sectors, including representation from city economic development, all of whom represent organizations that have a vested interest in ensuring a thriving and sustainable urban core.

“The need for this committee gained momentum during recent business roundtable conversations with Mayor Hicks-Hudson,” says Randy Oostra, ProMedica president and CEO, and co-chair of the 22nd Century Committee. “Conversation and comments underscored the need to plan for long-term success by looking at long-range plans. What we begin today will be picked up and carried forward by those who will come after us, and those who come after them.”

The vision of the 22nd Century Committee is to achieve a thriving and sustainable Toledo metropolitan core that will be realized through successful partnerships and collaboration between the private and public sector.

“The committee will build on the momentum of individual business and community leaders, the existing downtown development groups, and many others who have been instrumental in working to re- energize and revitalize downtown to the glory days of the 1950s and 1960s,” says Toledo Mayor, Paula Hicks-Hudson.

“Members of the 22nd Century Committee see tremendous value in a re-energized downtown,” says Bob LaClair, Fifth Third Bank president and CEO, and co-chair of the 22nd Century Committee. “One of the most powerful assets of a downtown re-vitalization is the emotion and memory we all feel with the commitment in this process of renewal. Many of us remember the days when our downtown was bustling, vibrant and filled with people. It can – and will – be that way again.”

The 22nd Century Committee will focus on a number of critical initial strategies to re-energize our urban core, including:

The strategic plan will identify short-range and long-range development ideas, yet remain “evergreen” so that it can be regularly updated and timely to match the community’s evolving needs. In this way, it will serve as a blueprint for following generations.

“In essence, the establishment of this committee is like dropping a stone in a pond; what we do will be immediately impactful in our approach, but its ripple effects will be far-reaching and felt for generations to come,” says Oostra.

The 22nd Century Committee is a partnership comprised of Toledo-area business leaders from private and public sectors, including the City of Toledo Department of Economic Development. The group will provide catalytic leadership and strategic direction on the renaissance and revitalization of Toledo’s downtown urban core for residents to live and work into the 22nd century.