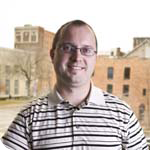 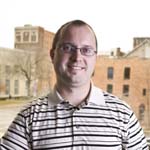 TOLEDO, Ohio, June 17, 2014 – SSOE Group (www.ssoe.com), a global engineering, procurement, and construction management (EPCM) firm, announced today that Andrew Mekus, PE, has been named “Young Engineer of the Year” by the Ohio Society of Professional Engineers (OSPE). Andrew was presented this honor in recognition of his exemplary community, civic, and professional undertakings as well as enthusiasm for the engineering profession and dedicated efforts to support activities of OSPE and the Toledo Chapter.

Joe Cherry, PE, fellow colleague at SSOE and recently elected 2014-2015 President of OSPE, expressed his congratulations, “I’m thrilled to hear that another one of SSOE’s talented engineers has been recognized as Ohio’s Young Engineer of the Year for the second consecutive year. Andrew’s professional distinction and service to his community make this honor well deserved. Working at SSOE I’ve witnessed his commitment to the profession through the development of younger generations first-hand, as well as his ability to successfully lead engineers and designers toward the completion of world-class projects. Congratulations!” Joe also served as the 2012-2013 president of the Toledo OSPE chapter.

Mekus is a 2005 graduate of the University of Cincinnati with a Bachelor of Science in Chemical Engineering and has been with SSOE since 2005. Andrew earned his PE license for the state of Ohio in 2010. In addition to his recognition as “Young Engineer of the Year” from OSPE, Andrew was previously named “2013 Young Engineer of the Year” by the Toledo Society of Professional Engineers (TSPE).

The award was presented at OSPE’s Awards Luncheon on June 13, 2014 as part of the 2014 OSPE Spring Continuing Professional Development (CPD) Conference and Annual Member Meeting held at The Park Inn located in Toledo, Ohio.

With 18 offices around the world, SSOE is known for making its clients successful by saving them time, trouble, and money. Over the company’s 70-year history, it has earned a reputation for providing quality project solutions to semiconductor, automotive, food, chemical, glass, manufacturing, healthcare, power, and general building industries—with projects completed in 40 countries. Visit www.ssoe.com for additional information and career opportunities.