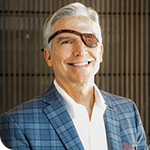 The award is presented to an active AIA Georgia member architect who exemplifies the principles of the profession and who has displayed a significant amount of service throughout the community. Presented in honor of Bernard B. Rothschild, FAIA, a pivotal figure within the field of architecture, the award is the highest honor AIA Georgia can bestow on an individual, alive or deceased.

“Bill is a worthy candidate for the Bernard B. Rothschild Award,” said Ron Stang, AIA, Principal of SSOE | S&W’s Building Design Group. “Not only did he work under Rothschild in his early years as an architect, but he embodies the noble attributes he imparted. Bill Clark’s career of service and leadership in architecture and his giving heart, very much align with Mr. Rothschild’s generosity of spirit.”

Clark began his career at FABRAP, the firm founded by Bernard “Rocky” Rothschild, FAIA. He has been a longtime leader at Stevens & Wilkinson, now SSOE | S&W, helping to grow the firm into one of the oldest continuously operating architecture firms in Georgia. Since joining SSOE | S&W, Clark has worked on several of the firm’s most notable projects throughout the state, projects that include the award-winning Nathan Deal Judicial Center, Georgia Municipal Association’s new headquarters, and Lanier Technical College’s new Hall County Replacement Campus.

His role as principal and lead architect have directly contributed to the numerous AIA, Urban Design, Georgia Trust, and Urban Land Institute (ULI) awards the firm has won, further advancing SSOE | S&W’s reputation of excellence in architectural design and the built environment.

Embodying the attributes of what is often referred to as, the “Citizen Architect,” Clark continuously uses his talents in architecture to better the community. To date, Clark has volunteered his time on a number of civic and non-profit projects that include the Paideia School, the Atlanta Rotary Club, and the City of Avondale.

Clark is a proud alum of Georgia Institute of Technology’s (Georgia Tech) School of Architecture, where he earned both his Bachelor of Science and Masters of Architecture. In addition to being a noted Rotarian, Clark has also served as the Past President of the Atlanta Chapter of the American Institute of Architects (AIA Atlanta) and is an active participant in the following organizations: Georgia Association of State Facility Planners, the Association for Learning Environments (A4LE) and the Construction Owners Association of America (COAA).

Clark is the second recipient of the Bernard B. Rothschild Award at SSOE | S&W. Janice Wittschiebe, AIA, LEED AP, NCIDQ, Principal and Architect, received this distinguished award in the Fall of 2019.

For the complete list of award winners, visit: https://aiaga.org/awards/design-honor-award-winners-2021/.