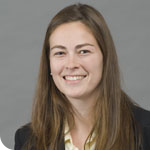 TOLEDO, Ohio, August 5, 2013 – SSOE Group (www.ssoe.com), a global engineering, procurement, and construction management (EPCM) firm, announced today that Adrienne Taylor, PE, has been named “Young Engineer of the Year” by the Ohio Society of Professional Engineers (OSPE). Adrienne was presented this honor in recognition of her exemplary community, civic, and professional undertakings as well as enthusiasm for the engineering profession and dedicated efforts to support activities of OSPE and the Toledo Chapter.

Joe Cherry, PE, President of the Toledo Chapter of OSPE and fellow colleague at SSOE, shared his excitement about the award, “I was thrilled to see that one of SSOE’s best and brightest received recognition in 2012 as Toledo’s Young Engineer of the Year. Being named Ohio’s Young Engineer of the Year in 2013 is an even more prestigious honor and well deserved by Adrienne. I’ve had the honor of witnessing firsthand how Adrienne successfully manages and leads a team of engineers and designers and know that she has earned this recognition. Congratulations!”

Taylor is a 2003 graduate of the University of Dayton with a Bachelor of Science in Chemical Engineering and has been with SSOE since 2005. With a strong commitment to both personal and professional development, Adrienne earned her Professional Engineering (PE) license for the state of Ohio in 2011. In addition to her recognition as “Young Engineer of the Year” from OSPE, Adrienne was previously named “2012 Young Engineer of the Year” by the Toledo Society of Professional Engineers (TSPE).

The award was presented at OSPE’s Awards Luncheon on June 15, 2013 as part of the 2013 OSPE Spring Continuing Professional Development Conference and Annual Member Meeting held at Ohio University in Athens, Ohio.

OSPE, a state affiliate of The National Society of Professional Engineers (NSPE), was established in 1878 to promote the ethical conduct of practicing professional engineers, high standards for engineering education, and to advance public safety and welfare. OSPE represents all disciplines and practice divisions of the engineering profession: industry, private practice, government, construction, and education.