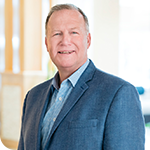 Bob Howell, President and Chief Executive Officer (CEO) at SSOE, recently partook in The Zweig Letter Q&A series called “Conference Call” where presidents from their “Hot” and “Best” firms list are interviewed. SSOE has been ranked as a “Hot Firm” for the past 2 years, signifying that they are one of the fastest-growing architecture, engineering, planning, and environmental consulting firms in the United States. SSOE made a significant jump in the rankings, moving up more than 50 spots in 2018. Bob was asked a variety of questions regarding the firm’s thoughts and practices on the promotion of young and new leaders, retention of employees, the succession planning process, and diversity and inclusion initiatives—among other topics.

Bob Howell began his career with SSOE in 1980. During his tenure, he worked his way up from a draftsman trainee through draftsman, designer, senior designer, and project manager. He was named an associate in 1990, and in 1993, Bob helped “kick start” the firm’s food sector. He was named a principal in 1999, ultimately taking the helm of all Industrial Process Operations in 2004. Bob moved into an International Operations position in late 2008 to support SSOE’s expansion globally. The following year, he was named Chief Operating Officer, responsible for SSOE’s global operations.

Bob was elected to SSOE’s Board of Directors in 2006 and served as Chairman from December 2007 to December 2012. Due to term limits, Bob relinquished his Board seat in 2013 and became a non-voting Board Advisor. He was re-elected to the Board in December 2013, and now serves in a permanent capacity since beginning his tenure as CEO.