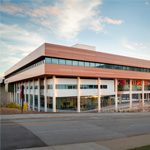 Championed by Darla Moore, for whom the school is named, the building opened in August 2014. It is the first public building in South Carolina to earn LEED Platinum. The Moore School joins business schools at Harvard and Stanford universities among a few U.S. business schools to earn the exceptional rating.

“I’m very proud that the Darla Moore School of Business has earned LEED Platinum certification,” said Moore School Dean Peter Brews. “This places the Moore School among an elite group of buildings earning the highest possible certification for sustainability – a goal that the school set early on in the design and construction of our new building.”

In addition to enhancing the school’s teaching and research activities, the building and its green design has played an important role in the recruitment of students and faculty. Student ambassadors give tours every week that showcase the facility’s many green features.

The USGBC’s LEED (Leadership in Energy and Environmental Design) certification program is the nationally accepted standards for the design, construction and operation of high performance green buildings. There are four LEED certification levels: certified, silver, gold and the highest, platinum.

LEED certification is based on a point system in seven categories that include water efficiency, energy, indoor environmental quality, materials and resources and innovation in design.

The school was selected by the U.S. Department of Energy’s Net-Zero Energy Initiative (Commercial Building Partnership Program), to partner with DOE’s Lawrence Berkeley National Laboratory and other national energy labs to incorporate the latest energy-saving technologies into the building’s design. The U.S. DOE chose to partner with the Moore School for its commitment to incorporate sustainability into its teaching and research and for using its building to make the business case for sustainability.

“We are honored that the Darla Moore School of Business received the highest green building commendation in the United States,” said Viñoly, lead designer and founder of the architectural firm. “It is a gratifying achievement to meet the university’s goals for academic excellence and a forward-looking vision for partnership with the community, all while setting a benchmark in terms of design and sustainable use of resources.”

Keith Branham, who served as SSOE’s chief engineer on the Moore School building, said the project required high-level collaboration and involved many of the university’s engineering graduates who are particularly proud of the hybrid heating, ventilation and air-conditioning (HVAC) systems.

“The building’s hybrid HVAC systems incorporate under-floor air, active chilled beams and variable air volume systems, all designed to reduce the amount of power needed to move air for heating and cooling,” said Branham whose team designed a separate HVAC system for the W.W. Hootie Johnson Performance Hall to ensure quiet air conditioning without affecting the acoustics of the hall. The performance hall serves as a 500-seat lecture hall as well as a performance space for the university’s School of Music. An intensively used space day and night, the hall represents a novel partnership between the business and music schools.

David Dewar, senior project executive with Gilbane Construction, said designing and constructing a building at LEED Platinum standards is “intrinsically complicated” and required a detailed trickle-up approach from crew to management to ensure that procedures and documentation were followed.

Dewar says his favorite green feature is the drinking fountains.

“All drinking fountains in the Moore School include a bottle filler that enables students to fill their reusable water bottles. By using a water bottle, less water is purchased in disposable plastic bottles, which reduces the environmental impact by eliminating plastic products in landfills,” said Dewar who adds the Moore School as the first LEED Platinum building to his many Gold and Silver-level projects.

Led by former dean Hildy Teegen and former university sustainability director Michael Koman, with the involvement of the business community, faculty, staff and students, the Moore School building is the most ambitious green building project in the university’s history.

The university has been a leader in collegiate sustainability for more than a decade. To date, the university has more than 10 LEED certified buildings, of which four – the Honors Residence, the Ernest F. Hollings Special Collections Library, Patterson Residence Hall the Rice Athletics Building – have earned Gold status. Five buildings have earned Silver, and six buildings are pending LEED certification.

The university ushered in an era of building green in 2004 when it opened Green (West) Quad, the state’s first public LEED building and the first green residence hall in the United States. It has been a major driver of South Carolina’s building green success, having played a pivotal role in building the state’s infrastructure for green construction through the training of building professionals, including architects, contractors and engineers, and spurring a green-product market in the Southeast.

About LEED Platinum in BD+C: 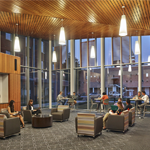 Following a 2002 Campus Master Plan decision to demolish and replace three major buildings in the middle of its main campus, Clemson University and SSOE set out to fundamentally reimagine the university’s entire Core Campus Precinct. The design team, consisting of Stevens & Wilkinson, VMDO Architects and Sasaki, diligently worked to develop a clear and engaging vision for the Precinct’s evolution. What came of this was a forward-looking approach to housing, academics, dining and student life programs combined into an intense, innovative and dynamic mixed-use center where current and prospective students can now connect with Clemson’s traditions in a new and exciting contemporary atmosphere.

“The Core Campus Precinct project embodies all the aspects of the ‘Clemson experience’ and is one of the most complex higher education projects of its kind,” said Ashby Gressette, AIA, principal at SSOE. “This new building has paved the way for other institutions to create similar spaces of this nature, and we look forward to seeing its influence in the higher education sector of our industry.”

Comprised of nearly 286,000 square feet, with a construction cost of approximately $83 million, the Core Campus Precinct achieves the growing demands for contemporary housing and dining options. The primary goals for this project included capturing the best of the “Clemson experience;” advanced coordination of future projects outlined in the Campus Master Plan; creating a facility to enable recruitment and retention of students; and achieving LEED Silver Certification, which U.S.G.B.C. confirmed the project accomplished late last year.

The purpose of the Design Awards program is to encourage and recognize distinguished architectural achievement, to honor architectural teams, their clients and consultants who work together to improve the built environment, and to demonstrate and raise public awareness of the architect’s role in shaping the quality of life through superior design.

AIASC announced this year’s award recipients at their annual Design Conference in conjunction with ArtFields, a renowned nine-day art competition. Held in the small town of Lake City, S.C., the conference began on April 18 and ended on Friday, April 20. This year’s theme, Community: By Design, focused on the power of art and design in creative place-making, especially as it pertains to small rural communities.

SSOE greatly contributed to the success Lake City has experienced over the last decade by designing the projects that helped ArtFields come to life, projects including the National Bean Market Museum where the ceremony for this year’s Design Awards was held. In addition to the National Bean Market Museum, SSOE also worked on the following projects in Lake City: The Ragsdale Museum, Jones Carter Art Gallery, Village Green, the Ronald E. McNair Science Park and Life History Center, Imperial Building, and Comfort Stations. 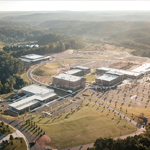 “We are thrilled to deliver this cutting-edge campus to Lanier Technical College after three years of diligent work by our team,” said Todd Dolson, AIA, of SSOE GA. “Alongside our partners at Pond, we feel we have achieved our goal in creating a 21st Century Campus that fits architecturally in the community while offering unique learning environments for every personality.”

SSOE was responsible for the master planning, complete interior design and FF&E of the entire campus, as well as the design of the Breeden-Giles Hall Administration & Student Success Building, the Chris Riley Instructional Building, and the Wilbur & Dixie Ramsey Conference Center.

The centerpiece of the project is the Administration and Student Success Center, which are considered the new “front door” to the campus – and house the Office of the President, student services, student affairs, and student life departments. By placing each of these buildings together, the team created a “one-stop-shop” where students can manage all aspects of their professional development and career planning.

Finally, the new conference center is highlighted by large gathering spaces, including a 225-seat auditorium and 10,000-square-foot exhibition hall. To encourage collaboration, the center also features break-out classrooms, study zones, and magnet spaces and that now allow students to choose their own path for learning. 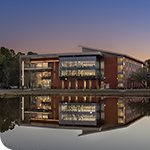 SSOE | Stevens & Wilkinson’s Georgia Southern Center for Engineering and Research project was recently featured in Lab Manager. The new 140,000 SF facility, which was completed in January 2021, houses all engineering programs on campus containing state-of-the-art laboratories for mechanical engineering, electrical engineering, robotics, and manufacturing engineering, among others. The building is designed to facilitate academic and institutional partnerships throughout the region and produce the next generation of highly trained engineers prepared for 21st century professions.

END_OF_DOCUMENT_TOKEN_TO_BE_REPLACED 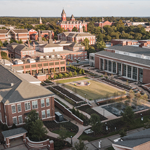 Cleveland, OH – April 1, 2020 –SSOE Group (www.ssoe.com), an internationally ranked architecture and engineering firm, has received an Outstanding Project Award for excellence in educational facility design in the spring 2020 edition of Learning By Design, the premier source for education design innovation and excellence. The Auburn University – Gavin Engineering Research Laboratory (Auburn, AL) has been recognized by Learning By Design magazine for its architectural and interior design and for having next-generation benchmark type design and planning features worthy of imitation.

Learning By Design’s distinguished spring 2020 jury of five architects and end-users applauded Stevens & Wilkinson for its accomplishment in designing the Auburn University – Gavin Engineering Research Laboratory. All projects included in this edition are each peer-reviewed. The jury discusses and looks for in the project unique and or new concepts being implemented to improve education facility building design. Projects such as the Auburn University – Gavin Engineering Research Laboratory are scored on six measures: Innovation, Community Need, Interior Design, Sustainability, Functional Design, and 21st Century Learning.

The Jury comments about this project included: “The design took advantage of existing space while redesigning to make the most of natural light and redesigning spaces within with relationship to existing elements, i.e. windows. The environment has a mixture of an industrial feel within the working spaces, but a relaxing, calming feel within the lounge and collaboration areas. This project fulfills a mission to give space to the users, and includes an aesthetic that feels democratic.”

Learning By Design, published in the Spring, Summer, Fall each year circulates to more than 50,000 leaders and decision-makers at all levels of education—from early childhood and elementary schools, career-technical, college, and university-level institutions across the United States. For more details and to access the magazine’s digital edition, visit: www.learningbydesignmagazine.com.

In the fall of 2020, LEARNING BY DESIGN will publish its October Architectural and Interior Design Awards of Excellence edition. This issue will feature a new group of recently activated or designed Pre-K to 12 schools and college/university facilities. Editorial will focus in on education design research, transforming environments for socialization and pedagogy, and includes a report from DIALOGUES 2020. 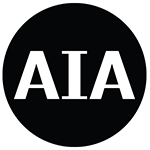 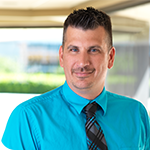 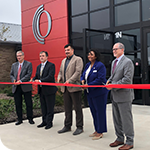 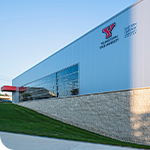 TOLEDO, Ohio, August 31, 2021 – SSOE Group (www.ssoe.com), a global project delivery firm for architecture, engineering, and construction management, is excited and proud to announce their Youngstown State University Excellence Training Center (ETC) project hosted a ribbon cutting at the end of July. The ETC, located in Youngstown, Ohio, is a $12 million facility that will serve as an advanced manufacturing education and workforce training facility.
END_OF_DOCUMENT_TOKEN_TO_BE_REPLACED